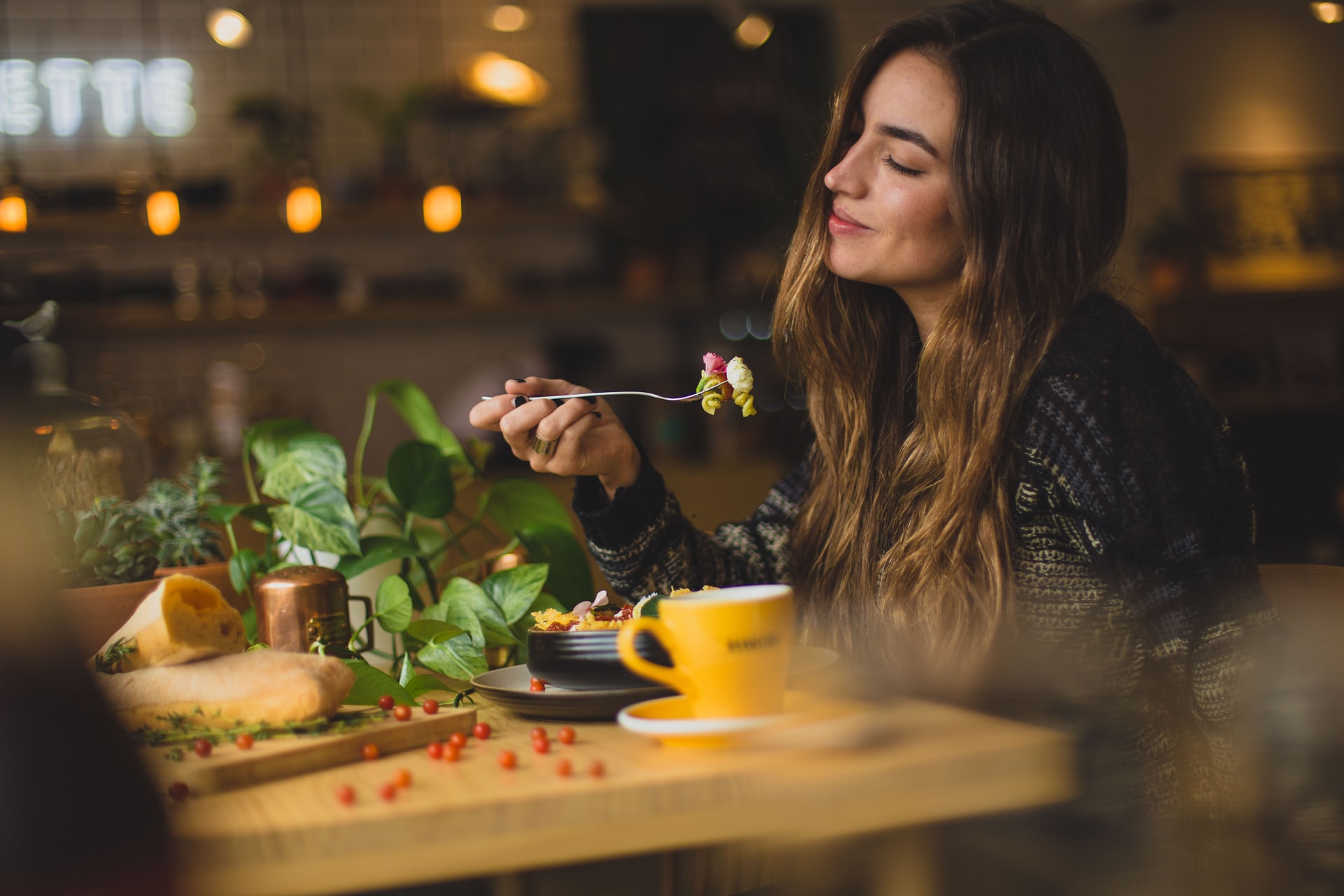 You might have heard about the hot new internet trend of eating in front of a webcam while thousands of people are watching. Or maybe seen a video of people eating or even competing against each other.

In fact, it’s such a fun and popular activity, it even has a name. It’s called a Mukbang.

But what is Mukbang exactly?

Mukbang is when someone hosts an online audiovisual broadcast while consuming food and interacting with the audience. It became popular in South Korea over a decade ago, around 2008. Since then, it’s become a worldwide trend.

But if you’re only just discovering this peculiar trend, you probably have a whole list of questions.

Luckily for you, we’ve got all the answers!

Today, we’ll cover in detail everything starting from what is a Mukbang, to how it originated, to its adoption in the US, to why do people watch Mukbang, all the way to who are the most popular Mukbangers.

So, now is the time for you to find out all about Mukbang! Grab a snack and read on.

Why Is It Called a Mukbang? Mukbang Origin

The word Mukbang is actually quite self-explanatory. Mukbang in Korean is a blend of two words muk-bang – “eating” (myeongnyun) and “broadcast” (bangsong). The English equivalent would be “eatcast.” The Mukbang definition and Mukbang meaning can be more or less specific depending on where you look for it.

Occasionally, you can come across several Mukbangers hosting an event together. What type of food they will consume also differs. Some of them are vegans, so the meals they have are strictly plant-based.

Anyhow, all Mukbangers eat vast amounts of food. Some of them also broadcast while they shop and prepare the food, while others just order a takeout. Mukbangers host their broadcasts from their homes, but some choose to go to restaurants or any other place that serves food. They’re sometimes accused of having bad table manners and promoting unhealthy eating habits.

While explaining what mukbangs means, you have to keep in mind that many people find these activities very entertaining, which allows the Mukbangers to generate a pretty substantial income. In fact, one of the most popular Mukbangers for 2019 has 3.93 million Youtube subscribers, with one single video having a whopping 25 million views.

Since this trend originated in South Korea, many Mukbangers are Korean, but their videos are subtitled in more than a few languages. Most importantly, Mukbangers are getting very well paid for their food eating shows. This is one of the reasons why so many American YouTubers are jumping on the bandwagon. They also get sponsorships, ads, and support from their fans, not to mention that they earn per pageviews.

But when we’re looking at what is Mukbang, the million-dollar question remains:

Why are millions of people watching Mukbang?

Some believe the reason why live stream eating is so popular is that some people like to watch someone else eat while they’re having their own meals. Others point out that lonely people watch Mukbang videos because that’s how they feel connected to others.

American Mukbang: All about Mukbang in the US

Around 2015, Americans also became interested in watching a Mukbang live stream. Although it took time for US Mukbang YouTube channels to become trendy, nowadays they are quite popular. After an American entertainment company posted videos of how famous YouTubers react to Korean Mukbang, the trend exploded in the US.

Today, lots of Americans make eating broadcasts. Some are doing it to earn money, while others are just in it to have a bit of fun. One of the reasons why Mukbang took off is due to the fact that American culture is very food-oriented. It’s all about food and the different kinds of food.

Why do people like Mukbang, and why is Mukbang a thing, especially in the US?

Well, fast food is synonymous with the American eating lifestyle. So, it’s no wonder Mukbang culture was easily adopted in the US.

Food eating contests have been part of American popular culture for ages. Mukbang is a similar concept. Firstly, people consume vast amounts of food in Mukbangs. Secondly, both food contests and Mukbangs tend to focus on comfort food.

As it turns out, viewers prefer to watch Mukbangers eating junk food. It’s probably because more and more people are trying to have a balanced healthy diet. So, they indulge in a Mukbang stream instead of, say, devouring five hot dogs and a large pack of chips themselves.

Is it weird that I like to watch people eat?

Well, once you learn how many subscribers YouTube Mukbangers have, you’ll realize you’re not alone.

For all of you who are just getting to know about Muk bang, American media star Trisha Paytas also contributed to this trend’s skyrocketing popularity. Trisha has made collaborative Mukbang videos with Nikocado Avocado who is also posting Mukbang videos (among others) on his YouTube channel, which has an impressive 549K subscribers.

You’d be surprised to hear that in 2020, the Nikocado Avocado before and after he got fat video showed previously deleted footage of him while he was eating only plant-based food and plenty of avocados prior to switching to Mukbang. As a result, he has gained weight, and his overall lifestyle has changed dramatically.

Another American Mukbang star is Bethany Gaskin. She became a millionaire in 15 months by making Mukbang videos. These are a few very popular examples of US YouTube stars adopting the Korean eating shows.

Banzz is one of the most popular Korean BJs – and not just because he can eat massive amounts of food. Have a look, and you’ll be shocked to see how well he maintains his physique.

Many of you are probably wondering how can Muckbangers eat so much? Well, Banzz has certainly figured out how to stay away from Mukbang eating disorder risks by working out on a daily basis.

Yuka Kinoshita is another famous BJ. Her YouTube channel has a mind-blowing 5.48 million subscribers. In 2020, she ate 200 sushi in one sitting. Her channel is a shining example of what Mukbang means. She eats massive amounts of food, and her Mukbang food stream also includes fast food, raising the question of is Mukbang unhealthy.

Last but not least:

HunniBee ASMR is one of the Mukbangs stars who has combined another online streaming trend – ASMR – with Mukbang. She has 3.96 million subscribers on her YouTube channel, and her videos have been watched about 49 million times.

How amazing is that? We bet that you’d want a YouTube audience and channel with that amount of views.

By now, you’re probably wondering how much do you make from Mukbang?

Actually, Hunnibee’s net worth is $1.5 million. On top of combining ASMR with eating, the food this YouTube star eats is not typical junk food. Her streams include eating everyday objects like brushes, spoons, and sneakers, which are entirely made specifically in one color per video.

Let that sink in for a minute…

Why Is Mukbang Popular?

Ever since the Mukbangs appeared back in 2008, this online food eating phenomenon has been growing in popularity. One of the reasons why are Mukbangs so popular is because they are raising concerns about eating habits.

What’s more, people who don’t want to eat alone turn to watching Mukbang videos as a way to socialize.

It’s not hard to define Muckbang. Simply put, it’s a live broadcast or video of people eating a generous amount of food and interacting with the viewers. Now that you have a clear idea of what is Mukbang, you should know that the trend, which originated in South Korea just over a decade ago, has nowadays exploded globally.

Although many health concerns are raised about this trend, that doesn’t stop millions of people from enjoying it. This encourages more YouTubers to try to make Mukbang videos. Besides, they’re able to earn a lot of money simply by eating.

Not a bad way to make a living, is it?

Q: What is the purpose of a Mukbang?

The purpose of Mukbang is to engage viewers in watching live streams or videos of people consuming plenty of food. Food is a basic human need, and that explains why do we like watching people eat. Plus, Mukbangers indulge in foods that we usually avoid to keep a balanced diet and eating habits. That’s why millions of people find Mukbang entertaining.

After the trend became extremely popular in South Korea, the Korean government actually issued a  health warning for this activity. In addition, the government set guidelines for Mukbang shows. The main concerns were the side effects of watching people eat, since Mukbang may promote eating disorders.

The trend originated on the live stream platform AfreecaTV, but it exploded after Twitch added a social eating channel. It also became very popular on YouTube. There are multiple reasons why do we like watching people eat, and that’s why millions of people enjoy Mukbang videos.

Q: How much do Mukbang Youtubers make?

YouTubers are earning millions from eating on screen. Yes, some BJs are making six figures by filming these videos and demonstrating what is Mukbang. HunniBee, a famous YouTube star who makes Mukbang ASMR videos, has estimated average monthly earnings of over half a million dollars.