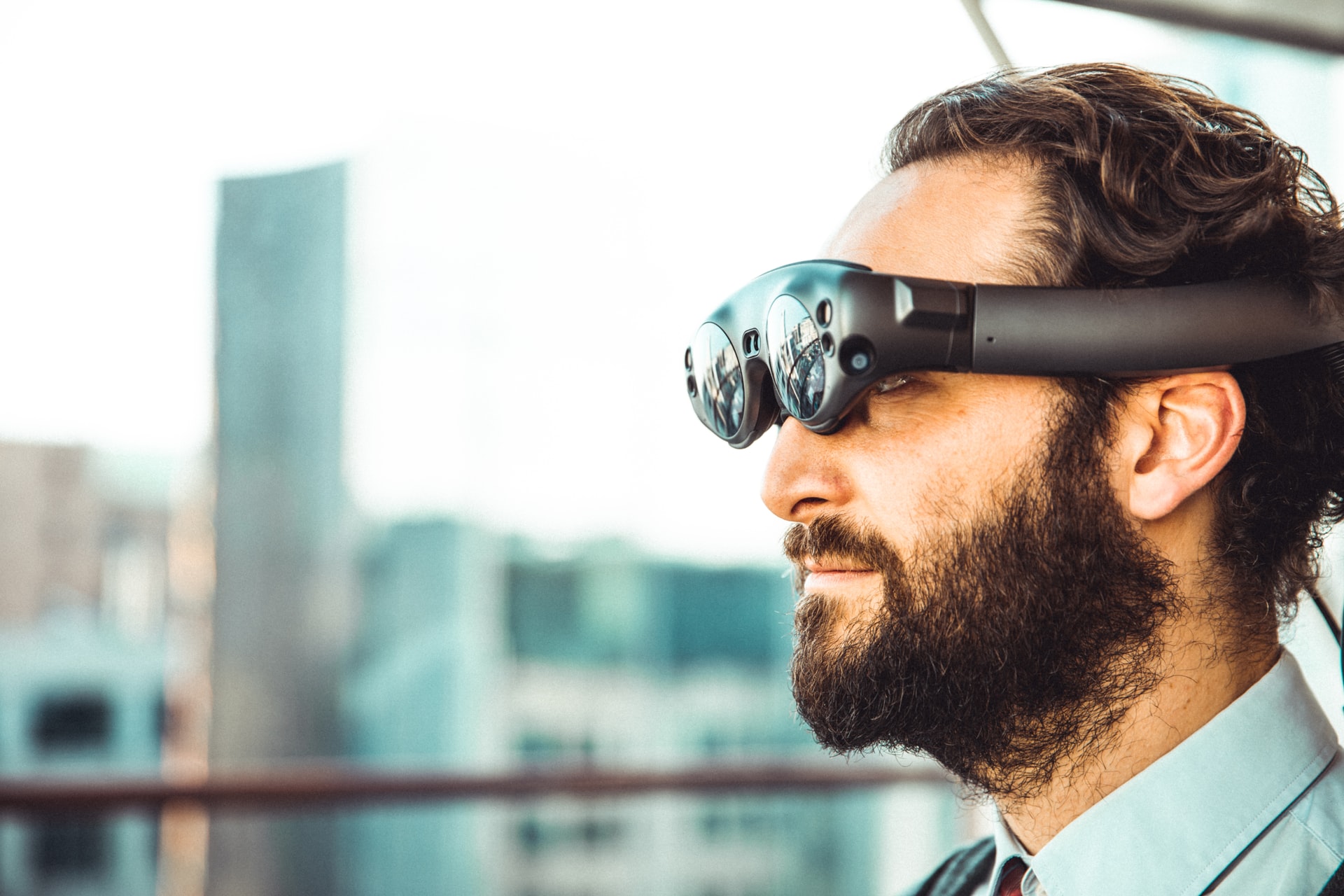 Augmented reality technology (AR) integrates digital information with the physical environment, live and in real-time. It works by adding graphics, sounds, haptic feedback, and/or smells to the natural world. In this way, it’s able to combine real life with a superimposed image or animation, using the camera on a mobile device or special headgear.

It’s really exciting to see when AR technology will be able to improve our consumer experience in media and entertainment. Judging by the latest augmented reality statistics, it seems we will be able to experience the world in a very different way in the very near future.

1. AR and VR headsets sales are expected to exceed 30 million units per year by 2023.

In 2019, sales of virtual reality headsets were estimated at about 7 million units, while sales of AR augmented reality headsets were estimated at about 600,000 units. Augmented reality statistics sales show headset sales are expected to grow massively in the coming years, with sales of both technologies (AR and VR) expected to exceed 30 million units per year by 2023.

According to augmented reality growth statistics, the combined market for Augmented and Virtual Reality (AR/VR) is expected to be $18.8 billion in 2020. Consumer spending accounted for the largest single share of the AR/VR market worldwide, followed by the discrete manufacturing segment, both of which generated billions of dollars in revenue.

According to AR statistics 2020, consumer spending is expected to account for 37.4% or $7 billion of global AR/VR expenditure. The distribution and services sector is expected to spend over $4 billion.

In addition, the augmented reality revenue projections in regards to the time frame are the following:

81% of respondents predicted it would happen within five years.

But exactly how much is augmented reality worth?

It is estimated that the augmented reality market size will grow dramatically in the next few years. In the period from 2017 to 2025, the market is estimated to increase by more than an eye-watering $195 billion, skyrocketing from about $3.5 billion in 2017 to more than $198 billion in 2025.

How popular is augmented reality?

AR Technology is used in numerous industries such as healthcare, public safety, gas and oil, tourism, and marketing. As the technology evolves, consumers and businesses are realizing its potential, and its application and use will undoubtedly increase. The technology will be as widespread as the use of mobile devices today.

Here are the augmented reality use statistics:

The total number of downloads of augmented reality applications by consumers worldwide in 2022 is predicted to be over 5.5 billion, a dramatic increase over the 2016 figure of just over 1 billion downloads.

According to the latest data, there will be an estimated 2.4 billion users of mobile augmented reality (AR) worldwide by 2023, a massive increase of 2.2 billion from the 200 million in 2015.

So, by 2021, there will be an estimated 1.96 billion AR mobile users worldwide. Augmented reality users statistics show that the total number of AR users in the United States alone will be 85 million in 2021.

The use of AR and VR is increasing according to augmented reality ecommerce statistics, but different forces are driving their diffusion. VR is driven by advances in hardware, including higher quality and lower-cost headsets.

In contrast, AR is fuelled by software development and the creation of standardized platforms for creating new applications.

Thanks to faster and more advanced cellular networks, VR and AR are improving user experience and creating a larger potential market for cloud-based streaming applications. This should also lead to more affordable headsets and higher quality content.

7. 26% of surveyed industry experts cited user experience as one of the biggest obstacles to the mass adoption of AR.

In a survey conducted in early 2019, just over one-quarter of the industry experts surveyed cited user experience (bulky hardware and technical failures) as one of the biggest obstacles to the mass adoption of augmented reality technologies.

However, augmented reality facts show that many improvements are still needed for customers to realize that these technologies are a natural extension of the overall technology they already use in their daily lives. It’s worth noting that user experience was also the top topic of the 2018 survey.

Augmented reality usage statistics show that the second most common obstacle cited by 24% of respondents was content offerings.

On the one hand, consumers want to use these technologies when they exist.

On the other hand, the producers of immersive technologies have not created enough content because there were not enough users in the past.

8. 61% of the respondents listed consumer privacy and data security as their main concerns in regards to immersive technologies.

The good news is:

9. According to augmented reality statistics, 69% of the respondents of AR startups stated that the slow adoption by consumers was the most common concern they heard from potential investors.

The pace of adoption by the consumer is also present in the minds of the company founders. More than two-thirds of respondents (69%) said that this was the most common concern they heard from potential investors.

Additionally, 58% stated that the lack of an established market for the technology was an obstacle to investment.

But the thing is:

Some argue that the future of immersive technology will not lie with individual consumers. Click To Tweet

This technology will be consumed in a more secondary way. For example, in doctors’ offices or schools, or even by purchasing products manufactured using forms of immersive technology.

This brings us to the conclusion that AR and VR are important working tools.

10. 62% of surveyed respondents consider North America as the region with the most investment, facts about augmented reality reveal.

As the potential of the technologies shows, some regions and sectors continue to flourish. It is perhaps not surprising that North America is considered the region with the most investment (62%) and the fastest growth (57%) in the next five years.

In addition to the stability of the North American market, the survey revealed promising prospects for these technologies around the globe.

Only 13% of respondents named the Asia-Pacific region as the most promising investment region, but significantly, 18% of respondents said it would see the fastest growth in the industry over the next five years, representing a 38% margin in the technology-hungry Asian market.

According to augmented reality stats for 2020, nearly eight in ten surveyed professionals believe that the general acceptance of augmented reality or mixed reality technology (AR/VR) by consumers will occur within the next four years, while 8.9% believe this will be the case within a year.

VR Games, VR video/feature viewing, and AR gaming are the three largest use cases for Augmented and Virtual Reality (AR/VR ), with an estimated $20.8 billion spent on them in 2023.

This explains why the surveyed investors stated that they invested more money in immersive than they had predicted and that they would continue to invest in the coming year, focusing on software and hardware components.

Isn’t it exciting to be living at a time of such amazing technological progress?

The top owners of augmented and virtual reality (AR/VR) patents worldwide as of 2019 are Microsoft, the Sony Corporation, and the Intel Corporation. Microsoft owns the largest amount of AR/VR patents, with a total of 10,014 patents spanning 3,080 patent families.

With so many patents from different applications, you’re probably wondering:

How does augmented reality help us?

13. 44% of consumers under 40 have used AR technology for shopping.

According to the augmented reality statistics global, 44% of consumers under the age of 40 surveyed worldwide admitted to having used augmented reality technology while shopping in the last 12 months, with 21% of Generation Z and 23% of Millennials having tried the technology.

47% of respondents from both generations who have not yet used AR technology while shopping said they would like to do so if they had the opportunity.

14. 55% of consumers highlighted music and concerts as an area where AR experience would be of greatest benefit to them.

AR stats reveal that over half of consumers surveyed worldwide in the spring of 2019 addressed music and concerts as an area where an immersive augmented reality experience would be of greatest benefit to them. The joint-second most commonly highlighted areas were sporting events and movies/series (50% of consumers surveyed).

15. 61% of consumers prefer to make purchases from sites that offer augmented technology.

Augmented reality allows consumers to preview products or experience services in their normal lives before purchasing.

Using AR, consumers can preview products and are more likely to select the desired product easily.  Click To Tweet

With that in mind:

This is one of the great advantages of AR, which leads consumers to further say they’d patronize brick-and-mortar stores less if augmented reality is available on more ecommerce sites.

Furthermore, 40% of customers stated that they’ll even pay a higher price for any products they were allowed to preview through augmented reality. Implementation of such new technologies comes at a great price, though, so companies and organizations should consider this carefully.

What are businesses doing to address this?

17. 29% of consumers say they would prefer to use augmented reality to view the product before they purchase it.

70% of consumers expect to be more loyal to brands incorporating augmented reality as part of their shopping experience. Click To Tweet

That’s particularly the case when it comes to social commerce.

18. 6.83% of Android users who installed Pokémon Go are from the Netherlands.

What are some good examples of augmented reality?

One example of AR technology is the popular mobile game Pokémon Go. It led the way with a turnover of $10.2 million within 24 hours of its release. These AR statistics are from the world’s leading game app titles as of February 2017, ranked by revenue generated within the first day of its release.

The augmented reality demographics show AR gaming also seems to be intriguing for European consumers. The Netherlands had the highest percentage of Android users who had installed Pokémon Go on their phones.

The reasons for playing the game were different. For example, Swedes stated that their main reason for playing Pokémon Go was to move around during the game. This might give a perspective on who uses augmented reality and why.

20. Over 23 million jobs are projected to be created through VR and AR worldwide by 2030.

According to a virtual reality stats 2019 report, over 23 million jobs are projected to be created worldwide by 2030 through VR and AR technologies, an increase from the 800,000 jobs created by VR and AR. The term extended reality (XR) is used for all immersive technologies: AR, VR, and mixed reality (MR).

22. VR gaming, VR video/feature viewing, and AR gaming make up the three largest consumer use cases for AR and VR.

According to these VR statistics, the commercial use case for virtual reality expected to receive the largest investment in 2023 is training, with $8.5 billion to be invested in this field. VR gaming, VR video/feature viewing, and AR gaming make up the three largest consumer use cases for augmented and virtual reality, with $20.8 billion expected to be spent in 2023.

In conclusion, AR equipment sales are expected to grow, and the same goes for the market size.

In fact, AR revenue is expected to surpass the one from Virtual Reality. At the same time, the number of consumers is growing together with the number of mobile applications offering this technology.

So, developers should take heed of the latest augmented reality statistics and focus on improving user experience to ensure that AR technology is adopted. There are already successful examples of using augmented reality in areas like gaming, which motivates large investments in this immersive technology.