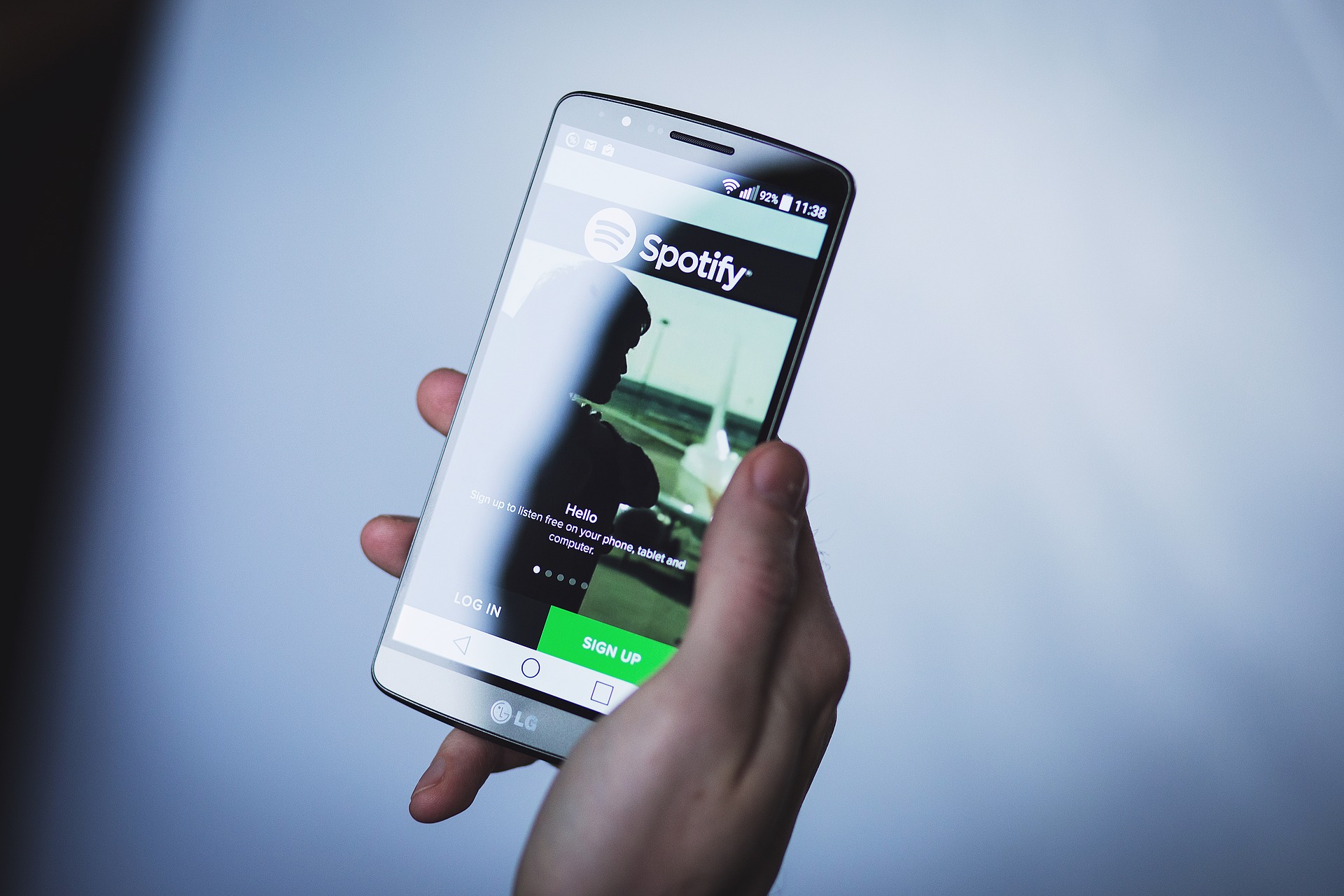 We all love a good tune, whether it’s Taylor Swift’s latest hit or an old Beatles’ classic.

With Spotify, users can access a whole music paradise at the click of a button or touch of the screen.

To find out exactly how popular Spotify is, keep scrolling to stay informed of some interesting Spotify stats!

Spotify was founded in 2006 by Daniel Ek and Martin Lorentzon in Sweden in the hope of combating the illegal downloading of music that was rampant at the time. Its name is a portmanteau of the words “spot” and “identify.”

Spotify launched to the US market in 2011, catapulting its growth. There are two different versions:

With that in mind, let’s dig deep into the latest stats:

Spotify is constantly growing year after year. In fact, Spotify statistics for 2017 showed growth in both types of Spotify users, contributing 39% to its total revenue. Premium subscriber revenue went up by 38% in 2017.

That was great news for the company because a whopping 90% of Spotify revenue comes from its premium subscribers. The remaining 10% comes from its ad-supported free service.

While Spotify sales are constantly growing each year, the company has been reporting losses for 12 years in a row leading up to 2018. The loss is mostly due to Spotify spending more than it was getting, mainly on royalties as well as Research and Development projects.

In 2015, when the company surpassed the €1 billion mark in revenue, it also met with a net loss of €162 million. The majority of this expense came from royalty payments, which amounted to over $882 million in 2014.

Finally, by Q4 2018, the company reported positive numbers across all types of income, including net income, operating income, and free cash flow. This was a first for Spotify, and it has only gone up further up since then.

4. Spotify has over 286 million listeners per month.

Almost everyone has a Spotify account these days. In fact, Spotify user statistics show that every month, 286 million people stream music on the platform. This is an impressive 31% growth from the previous year, which was at 271 million active listeners. According to Spotify stats for 2020, the company has already met its three-month forecast as of the period ending March 31, 2020.

Nevertheless, due to the global COVID-19 pandemic, many listeners’ daily routines have changed. Spotify listening stats since the worldwide lockdown have shown a significant decrease in listeners, especially in podcasts.

This is largely due to the significant decrease in users commuting to work, which is usually peak listening time for most.

Spotify user stats show that 130 million listeners take their music seriously, as they subscribe to Spotify Premium. Compared to last year, when the figures stood at 124 million Premium subscribers, this was a good increase.

However, due to the COVID-19 pandemic, users have been canceling their accounts. According to Spotify, one in six users said this was due to the uncertain economic situation.

But it’s not all bad news:

The majority of these users plan to renew their accounts once their financial situation is back on track.

6. Spotify is available in 79 countries.

Spotify is currently available in 79 markets, including Australia, Japan, Canada, Egypt, to name just a few. According to Spotify stats for 2019, Europe makes up the majority of the market in terms of Spotify users and Spotify subscribers, with 35% Monthly Active Users (MAU).

Following closely in second place is North America, making up 27% MAU, then it’s Latin America with 22%, followed by Rest of World with 16%. Unsurprisingly, more affluent regions have more subscribers.

Developing countries in the Rest of World category account for the fastest-growing segment. In 2019, when Spotify was launched in India, it picked up two million users in just two months. It is important to note that Latin American countries are also experiencing accelerated growth.

7. There were 29% more  Spotify Premium subscribers in 2019 than was predicted.

Spotify’s growth in terms of Premium subscribers in 2019 was considerably bigger than was forecast.

According to the company, this was the highest and fastest growth it had experienced, in large part thanks to several significant partnerships. For example, their “3 months on us” deal expanded to include Family Plan subscribers in the last quarter of that year.

During this time, Spotify’s partnership with Google Home in the US was also significant in driving up the number of premium subscribers. US customers were entitled to claim a free Google Home Mini with their Individual, Student, or Family Plans.

Besides this partnership, there were also other partnerships with Curry’s PC World in the UK and XBOX Game Pass in both US and the UK, to name a few, which offered a six-month free trial Spotify Premium to eligible users.

8. Spotify statistics reveal that 29% of users are Millennials aged between 25 and 34 years old.

Spotify gains millions of subscribers every quarter, with hundreds of millions of new visitors visiting the platform each month. In the US, Spotify podcasts are particularly popular among podcast aficionados.

To understand Spotify demographics in terms of age group, Spotify statistics for 2018 as of March that year, the largest percentage of users (29%) were between the ages of 25 and 34.

9. Spotify music stats show that there are over 50 million tracks on Spotify and counting.

In case you were wondering how many songs are on Spotify, you now have your answer.

And what a massive number it is!

Spotify prides itself on constantly delivering flawless content. With over 50 million tracks available, including captivating visuals and other assets, you can find anything from German industrial rock to traditional African music.

Like all influential brands, Spotify is aware of the latest branding statistics and understands the importance of having a strong brand image on social media. Compared to numbers in July 2013, the number of Spotify Facebook fans has increased by close to a mind-blowing 500%.

Podcasts on Spotify are very popular among listeners, with more than half a million titles available on the platform. Since 2019, Spotify has seen a huge growth in podcast audiences of over 50%, with a 39% increase in consumption hours.

The most streamed podcasts on Spotify are The Joe Budden Podcast, My Favorite Murder, Gemischtes Hack, Fest * Flauschig, and The Misfits Podcast. Click To Tweet

12. Ed Sheeran has the most listeners on Spotify with 69.15 million listeners monthly as of July 2019.

Ed Sheeran’s spot was due to the release of his fourth studio album, called the No. 6 Collaborations Project, on which he worked with many popular artists also on Spotify’s top monthly listeners list, including Justin Bieber and Khalid.

13. In 2019, Post Malone was the most streamed artist worldwide with 6.5 billion streams.

But how many subscribers does Spotify have altogether?

14. Globally, Spotify takes the lead as the industry’s favorite platform with 130 million subscribers in Q1 2020.

Pandora has been dominant in the US music streaming platform since 2000. Since 2017, though, the number of listeners on Spotify has been climbing gradually from 45.8 million.

In contrast, the number of Pandora listeners has been declining from a high of 74.5 million. So, in 2019, Spotify overtook Pandora and has continued to go from strength to strength; it’s expected to hit 75.9 million listeners in 2020.

Q: Can you see your Spotify stats?

Yes. In 2019, Spotify rolled out its now popular feature Spotify Wrapped where users can have a glimpse of their stats for Spotify over the year. Free members also have access to this but with less personalized results. Premium subscribers get more detailed results, including the number of minutes listened, the top genre, the most listened song, and so on. Listeners can also listen to their top songs of the year from a special playlist.

Here’s how you do it:

On the app, head to the home tab or search tab where you can find the Wrapped 2019 shortcut. Then, simply swipe through the screens to reveal your stats for Spotify neatly segmented into meaningful categories like “My top Spotify artists” and “My most listened to song on Spotify.” You will also have the option to share your statistics on social media on the last page.

For distribution companies such as TuneCore or Believe, Spotify generally pays royalties directly. For platforms that have a direct licensing agreement with Spotify such as Sony, Warner, and Universal, royalties are paid directly to the record labels.

Q: How do I see my top Spotify artists?

Spotify analytics for listeners has been one of Spotify’s most popular features. Listeners can have a summary of their listening habits. To get your Spotify stats and find out your top artists on Spotify, you can view it by simply logging into your Spotify app or heading to the Spotify stats website at spotify.com/wrapped.

And on that pleasant note:

The music industry will continue to evolve, making great music accessible to everyone, everywhere. And from these Spotify stats, it seems like the platform is taking the lead globally, with an even more promising future ahead.

The good news is:

Spotify’s innovative ideas bring us great things that we never even knew we needed. While it experienced growing pains early on, the company’s goal has always remained clear – to provide a robust music platform for listeners worldwide.

And now if you’d excuse us, we’re going to tune in to some new English folk on Spotify.