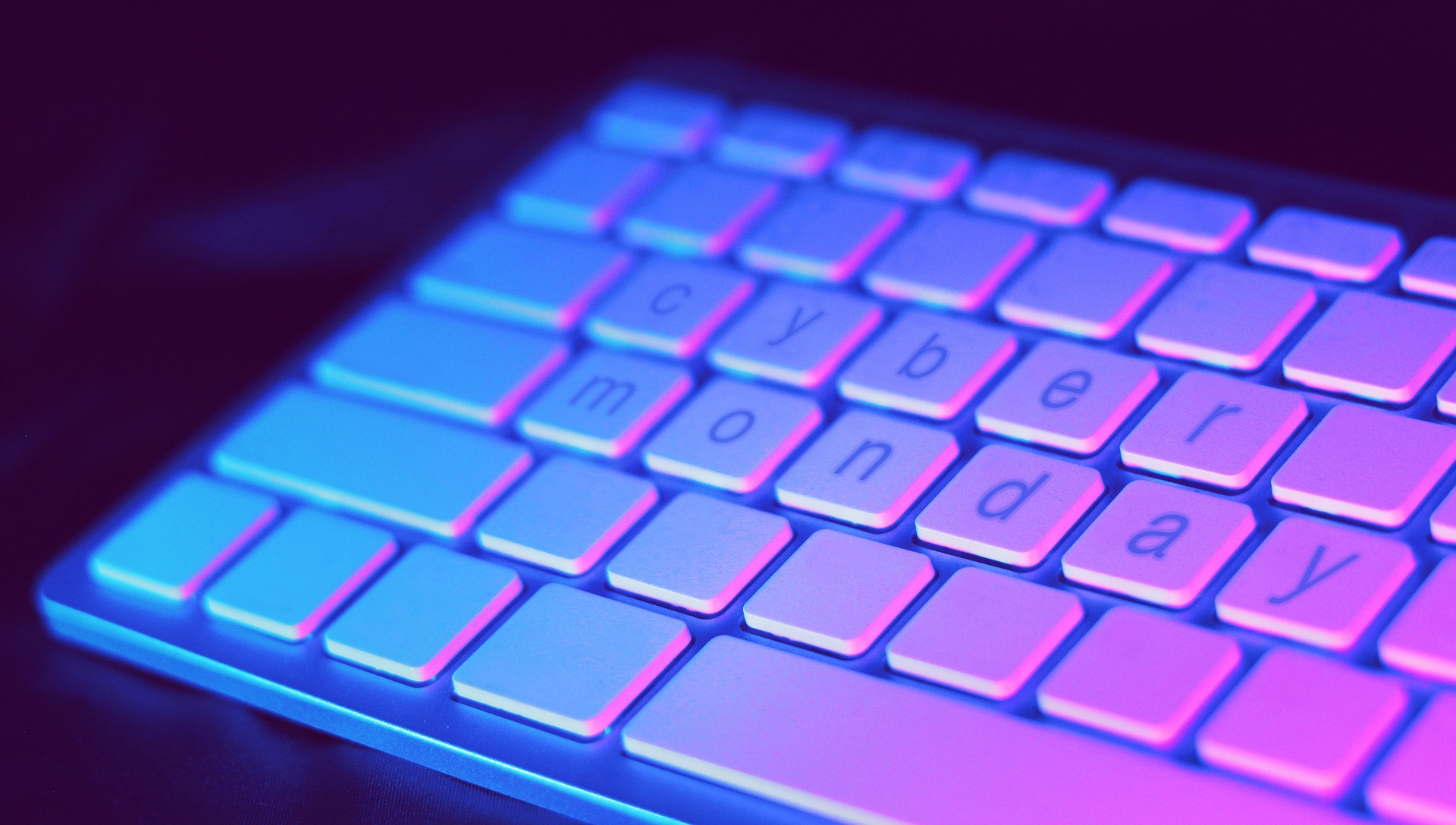 The week leading up to Black Friday can be full of offers and deal announcements. And it’s not rare that the end of the Thanksgiving dinner turns into browsing in preparation for the next day.

One of the biggest shopping weekends, the weekend from Thanksgiving Thursday through Cyber Monday requires between 530,000 and 590,000 additional workers to cater to the needs of millions of consumers looking for the best deals.

Here are some Black Friday vs Cyber Monday statistics that might help you make up your mind about when and how to do your shopping.

1. Sales during the 2020 “big five” weekend from Thanksgiving to Cyber Monday amounted to $39 billion.

Even before the weekend started, 30% of shoppers revealed their plans to do most of their shopping on Cyber Monday. Meanwhile, 24% responded they would be shopping on Black Friday.

Obviously, this massive swing was due in part to the Coronavirus. However, the trend of the whole weekend merging into one enormous shopping spree had already blurred the lines between individual days.

So, how do these figures compare to those from the previous year?

2. Black Friday statistics for 2019 show the total amount of that weekend’s sales amounted to $28.4 billion.

Black Friday vs Cyber Monday statistics for  2018 showed that when it comes to online sales, the frenzy started on Thanksgiving with sales going over $3.7 billion, which represented a 28% growth when the estimated and predicted number was 16.5% year over year.

Black Friday statistics for 2018 report sales worth $6.2 billion, with 23.6% growth. Surprisingly, Cyber Monday stats showed that sales on Saturday and Sunday saw more extensive growth (25% combined) than Cyber Monday 2018 sales, which were predicted to have the most visible growth that year.

This rise is slightly lower than that recorded in 2019 when spending went up 19.7% year over year.

4. Over 174 million Americans shopped between Thanksgiving and Cyber Monday in 2020.

How many people shop on Black Friday?

How much money is spent on Black Friday?

This makes it the second-largest shopping day in the United States so far, behind Cyber Monday 2019. The total amount of Black Friday spending worldwide was $717.5 billion in 2019. However, the percentage of people buying on this day is steadily dropping, from 59% in 2015 to 34% in 2019.

6. Being out of stock during the Black Friday shopping week in 2019 cost retailers $484 million in sales not realized.

Consumer spending online statistics show there were items consumers were already trying to buy but were out of stock in 3.3% of cases on Thanksgiving. However, the situation on Black Friday looked better, with 2.8%, and even better on Cyber Monday when only 2.4% of products were out of stock when shopping online.

The loss of potential sales due to this was nearly half a billion dollars.

In 2020, however, the pandemic emerged as the number one issue. Before the shopping weekend, around 44% of consumers said they wouldn’t feel comfortable shopping in brick-and-mortar stores until the pandemic subsided.

Additionally, another 25% said they would be shopping online until vaccinated.

Black Friday sales results in 2018 show that, among the consumers aged 35 to 44, the average spending during this weekend was $413.

This figure is $100 more than spending per person. And compared to the Deloitte prediction that $1536 would be spent on average during the holiday season, it makes for almost one-third of the holiday shopping money.

Over the entire weekend, a rise in online sales was evident. However, that doesn’t mean physical stores didn’t do well. Crowds still focused on brick-and-mortar, and the average Black Friday spending was highest in the 35 to 44 age group that preferred the live experience.

Up to 37% of shoppers said that the reason for abandoning brick-and-mortar shopping is the fact that stores became too busy and chaotic during the Black Friday sales. And up to 25% claim the deals and price cuts are simply not worth the bother.

9. M-commerce accounted for over 62% of all traffic during the 2018 Black Friday-Cyber Monday shopping weekend.

Black Friday shopping statistics show that during the start of the month, online shopping was done mainly on desktops (60%), followed by cell phones (30%) and tablets (10%).

On Thanksgiving, mobile devices were used for 68% of all online traffic, and 54% of orders were placed via mobile. On Friday, the figure was 67% and 49% for orders. So, both traffic and orders beat the predictions on all days of this shopping weekend in 2018.

10. Cyber Monday 2019 was the biggest shopping day in US history up to this point, with 3 billion sales through smartphones alone.

When we observe Black Friday online vs Cyber Monday trends, Friday saw sales of $7.4 billion in 2018, while Monday peaked at $7.9 billion.

And it didn’t end there:

Cyber Monday reached $10.84 billion in 2020, making it the biggest shopping day in US history so far, followed by Black Friday 2020.

11. In preparation for Black Friday and Cyber Monday, social media traffic was up by 41% on Thanksgiving in 2018.

Even if it was predicted that shoppers would use social commerce less than the previous year and revenues per social media visit would be 11% lower, Instagram use rose by a massive 73%. In addition, Pinterest saw a growth rate of 45%, with people looking for deals for tomorrow’s shopping.

Black Friday sales statistics show there were 3.5 billion emails sent out on Black Friday compared to Cyber Monday results of 4.1 billion. Looking at the previous year, it’s an increase of around half a billion emails when Friday saw 3 million and Monday 3.3 billion.

So, marketers clearly saw these two days as the best time to send an email.

Looking at the number of received messages on social media, the companies report receiving 92% more messages in the holiday months than the rest of the year.

13. The only shopping day to surpass Black Friday and Cyber Monday was Alibaba’s Singles Day.

The biggest shopping event with sales going higher than anyone expected was November 11, the Singles Day done by Alibaba, brought in an astonishing $4.68 billion during the first ten minutes of trade, went over $6.5 billion after 20 minutes of shopping, and eventually made a mind-blowing $30.8 billion.

In 2020, Alibaba reported that 250,000 brands participated in Singles Day. Interestingly, as many as 31,000 were overseas, with the US emerging as a leader in selling to China. In fact, US brands are responsible for over $5 billion of Alibaba’s total $74.1 billion Gross Merchandise Value (GMV).

A comparison of major shopping days and Black Friday statistics by year look like this:

All in all, this represented 27% growth from the year before for Singles Day, 19.3% for Cyber Monday, and 23% for Black Friday. Somewhat surprisingly, Thanksgiving enjoyed the most significant rise of all – 28%.

15. Average spending is slightly bigger on Black Friday, at $472.

Many shoppers spending less than $400, but the average spending on Friday was $472, compared to $415 on Cyber Monday.

Men are 10% more likely than women to spend over $1200 on Black Friday.19+ Awesome Black Friday vs Cyber Monday Statistics for 2021 Click To Tweet

The trend doesn’t change on Cyber Monday when they are 6% more likely to do the same.

On average, people spent $20 less than the year before, Black Friday statistics for 2017 reveal.

Cyber Monday follows with 22%, and in third place, we have the day starting off that week, Thanksgiving, with 15% of all shopping being done on Thursday leading up to the shopping weekend.

Small Business Saturday takes a share of 11% of holiday sales, and last-minute purchases done on Christmas Eve amount to 9% of the sales.

The predictions dropped drastically looking at 2019 when only 6% of people planned to do holiday shopping on Black Friday, especially compared to 2015 when that number stood at 60%, Black Friday vs Cyber Monday statistics confirm.

17. For 29% of people, Amazon is the go-to destination when looking for Black Friday & Cyber Monday deals.

Target, Best Buy, and Kohls follow with 15%, 14%, and 11%, respectively. Finally, Black Friday stats show 6% of shoppers think JCPenny will have the best deals.

Amazon Black Friday sales figures seem to be kept vague. In any event, they are topped by Amazon Prime Day sales, which amounted to $7.6 billion in 2019. In 2020, in the two weeks leading up to Prime Day, consumers generated more than $900 million in sales for small businesses.

While Black Friday and Cyber Monday both began as distinctly American phenomena, they quickly became immensely popular globally. So, we decided to have a quick look across the pond to see how UK trends compare with US ones.

18. Black Friday sales numbers show that the expected average spending on Black Friday in the United Kingdom was £316 in 2020.

This actually represented a slight rise from £293 in 2019. When broken down by region, the figures looked like this:

In 2020, men were more interested in electricals and technology. They intended to spend around £373, while women set their budget at a more modest £244. The high spenders are those aged 35 to 44, with average spending of £429. This is more than twice as much as the seniors’ budget of £201.

19. Black Friday vs Cyber Monday Statistics reveal only around 38% of UK shoppers planned to shop on Black Friday on the eve of the second lockdown in 2020.

With the second lockdown of the year just announced in England and Wales in the lead-up to the big shopping weekend of the year, interest in Black Friday shopping plummeted from 51% to 38%.

20. Black Friday and Cyber Monday in the UK in 2018 saw almost 5 million visits to Amazon UK, with over 4 million transactions.

Ultimately, whether you’ll do your shopping on Friday or Monday in the UK depends on what deal you’re looking for. Those buying tech could find 85% more data storage deals on Black Friday, with some products, such as those from Apple, only being off that day.

But one of the interesting facts about Cyber Monday is that if you’re buying clothes, Monday has 45% more discounts than Friday. And when it comes to shoes, the percentage is even higher, 50%, with beauty products seeing the same Cyber Monday sales statistics as shoes.

Even if more and more people are turning to online shopping, Black Friday vs Cyber Monday statistics reveal 84.2 million people in the US went to a brick-and-mortar store in 2019.

As many as 37.8 million opted for an early start.

Overall, over the four-day weekend, 189.6 million people made a purchase in 2019. In 2020, that number was 174 million. But from the previous years, we can see that the attention has visibly shifted towards Cyber Monday, especially with the blending of the long weekend.

When deciding whether to choose Cyber Monday or Black Friday, consumers are increasingly tired of crowds and rely on mobile devices. And if that’s not all, the COVID-19 has forced most consumers to avoid brick-and-mortar stores as much as possible. So, retailers are following that trend. And with more and more deals being tailored to Cyber Monday, it’s quite easy to save money shopping online.

Q: Are Cyber Monday deals the same as Black Friday?

In recent years, the old trend of Black Friday as the ultimate shopping day has changed. Due to the crowded stores and the hassle, many people are abandoning the day as their shopping choice and turning to Cyber Monday instead. So, the different deals offered on the two days can vary considerably. Still, the effects of the Coronavirus year are visible, as there is an emerging tendency for the five days between Thanksgiving and Cyber Monday to become one extended shopping weekend in the future.

Q: Is it worth waiting for Cyber Monday?

It is definitely worth waiting for Cyber Monday, not only because most deals are better, with savings around 21% on Cyber Monday and 18.5% on Black Friday. It’s also reported that a higher number of editor’s choice items and deals could be found on Cyber Monday. Not to mention the crowds that you’ll avoid doing your shopping online on Monday.

Q: How many people shopped on Cyber Monday?